June 24, 2013
PEiD is an intuitive application that relies on its user-friendly interface to detect packers, cryptors and compilers found in PE executable files. This portable tool is very popular among malware researchers for detection of packers / cryptors. 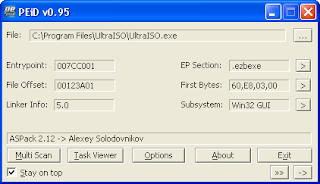 A memory corruption issue can be triggered by feeding a specially crafted Windows Portable Executable file into PEiD v 0.95.Exploitation of this issue requires the user to explicitly open a specially crafted EXE file. So the PEiD user should refrain from opening files from un-trusted third parties or accessing un-trusted remote sites.

Affected Version of PEiD is 0.95. This software is not under active development. Last stable version released on November 6th, 2008. So its still Unpatched.

Analysis of this Vulnerability: