February 28, 2014
Hello readers. Hope you are doing great. In this post I am going to explore our very own windows kernel little bit by reverse engineering a built in kernel module. If you have ever developed any kernel driver/module for windows it will be very easy for you to understand. If you are not very familiar with how device drivers work then codeproject.com has some really good resources to start up. So let's get started.

But Before we can start reversing the core component, take a look at the diagram mentioned below.

In above picture, the green elements are user mode components (Ring3). The diagram actually shows how apps.exe (a user mode application ) calls the kernel mode driver. We will try to cover each an every section mentioned in above diagram and try to reverse them, to understand how thing works.

Choosing a Target Driver to Reverse:


Its always better to start with simple thing. In this article we will reverse the Beep driver. The Beep Driver component provides the beep driver in the beep.sys file. This component also provides some supporting registry information. This is probably the smallest built in Kernel module in windows OS. It has only 6 routines.

The code is very simple and straight forward. You can see its calling Beep function which produces Beep sound. The function beep resides in Kernel32.dll. After compiling the code you should get beep.exe file. Running beep.exe should generate beep sound.


From below screen shot we can see, Beep driver has actually created a Device called "Beep".And you can also see many other information like major functions supported by this driver and many more. 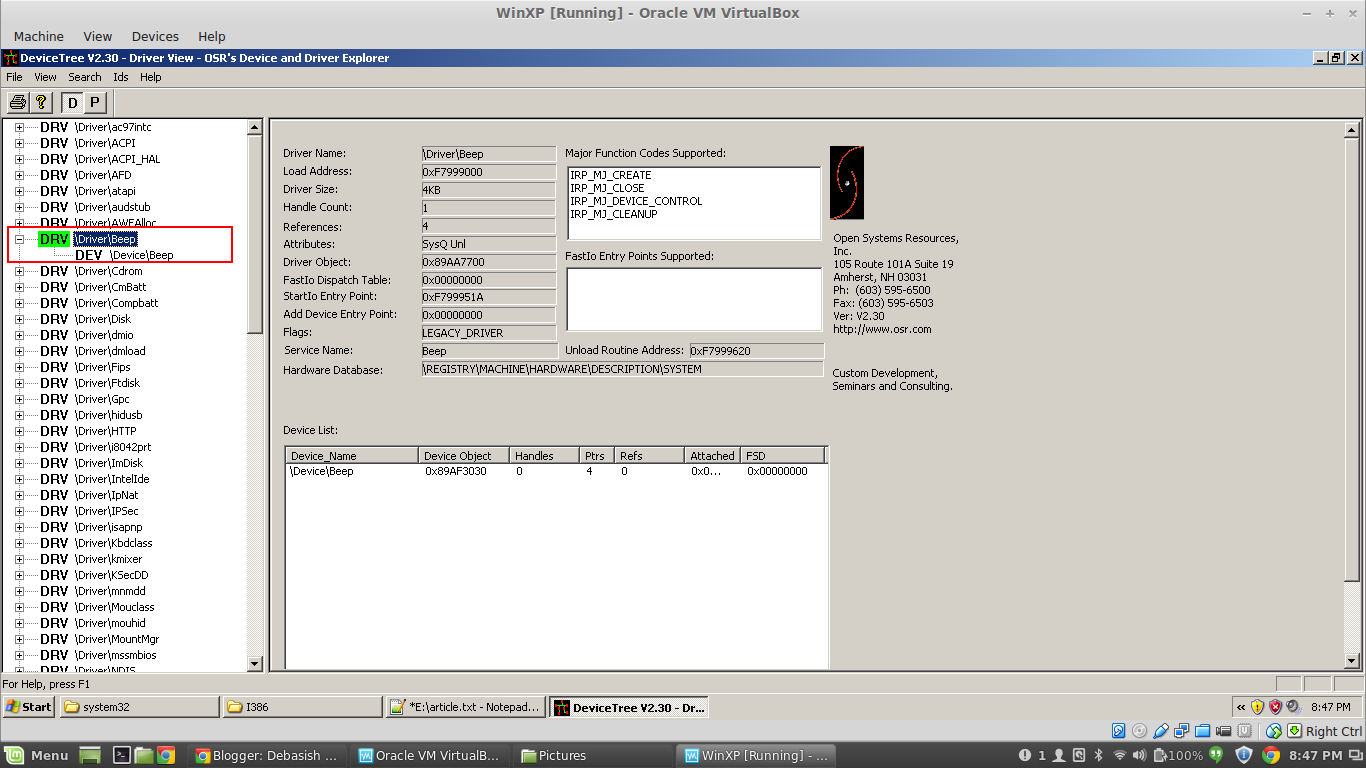 
IRP Tracker is very cool and powerful utility. It can actually sniff the Ring3 and Ring0 gateway and show details of messages passed from user mode process and kernel driver. Using this tool we are going to sniff all request which beep.exe actually actually sending from ring3 to ring0 to produce the beep sound.

Ok, So to start sniffing we need to provide the tool the driver name we want to sniff.  Go to File and select driver. Now you need to provide the driver name which we want to sniff. In this case we are only interested in sniffing the "Beep" driver. So now we started sniffing all messages between user and kernel. Now its time to execute the beep.exe we just compiled . When you execute the beep.exe file you will see few new entries in IRP Tracker window. 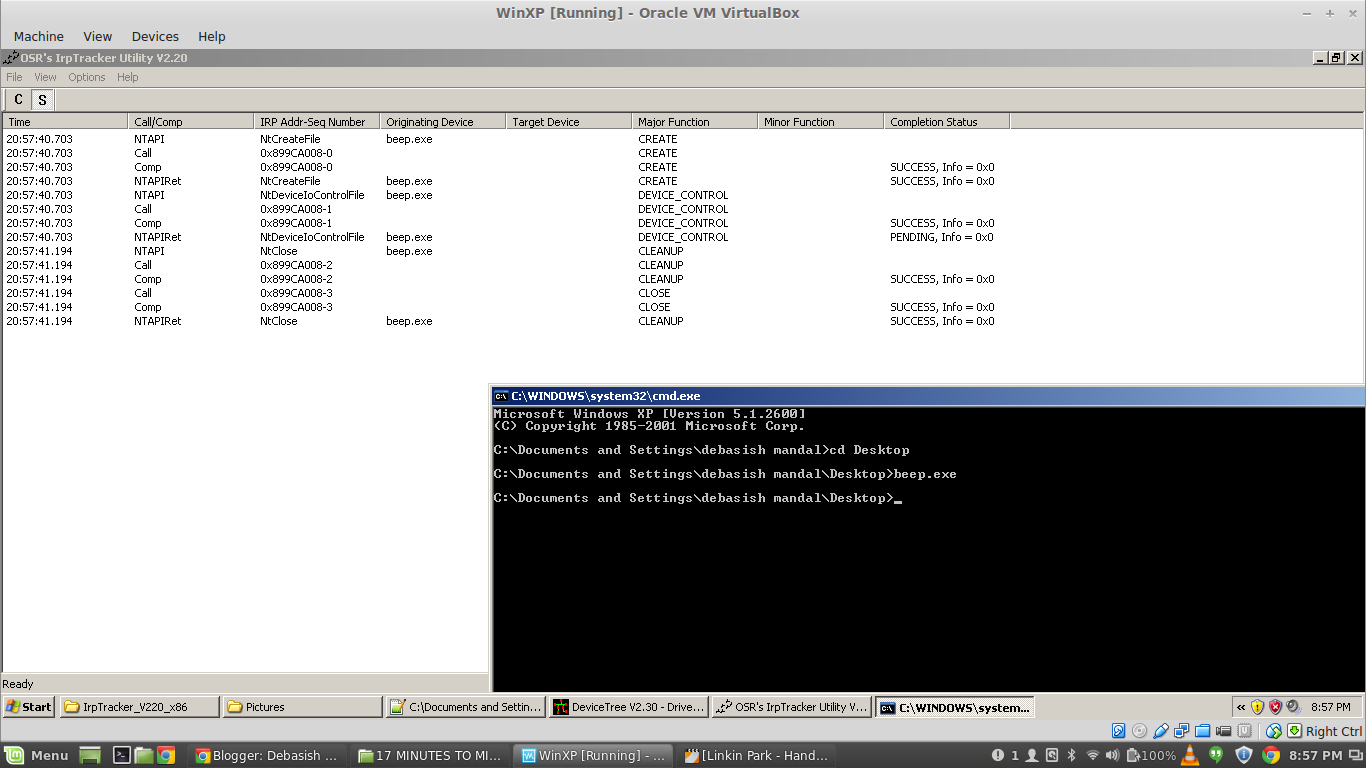 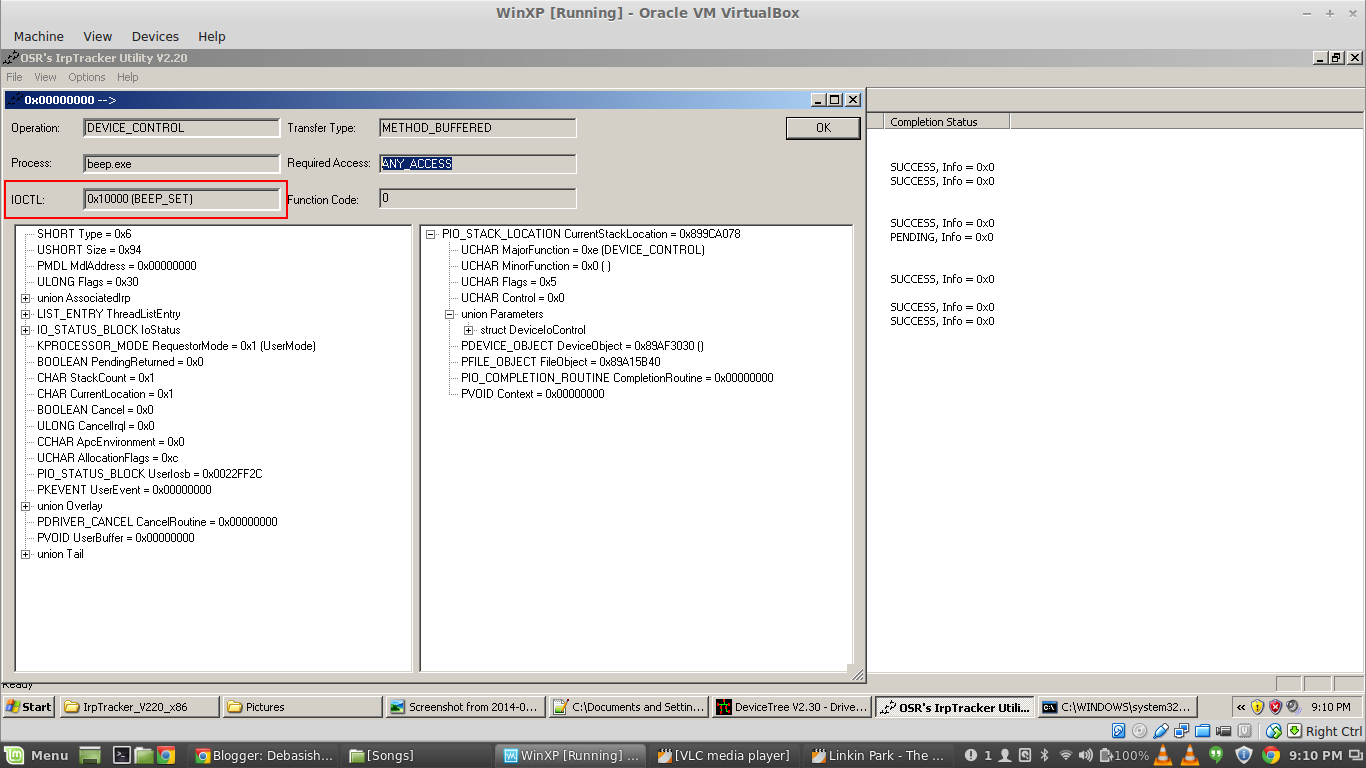 We can see its sending IOCTL code 0x10000 (BEEP_SET) to that device. Keep this in mind. We are going to come back to this in a minute.


To reverse the Beep routine, lets load Kernel32.dll in IDA Pro. After its loaded lets jump into Beep routine and you should see something like this. 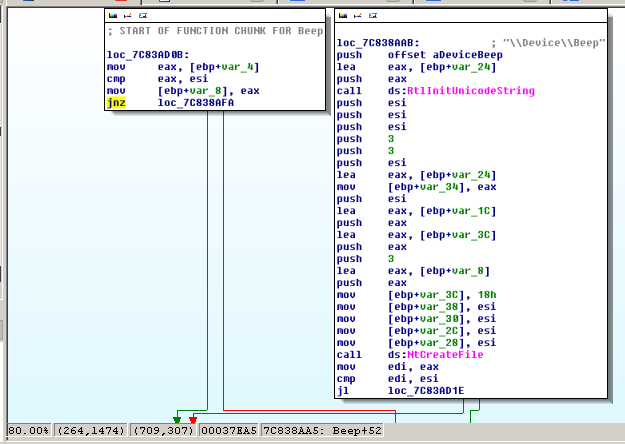 And we can see, its trying to communicate with the device Beep \\Device\\Beep by calling NtCreateFile. When communicating with a Kernel mode driver , any user land application uses NtCreateFile. If its successful this function returns one handle the target device. Using that handle we can read / write to that device. We will come to this later.

If we go little further inside Beep!Kernel32 we should see its trying to verify few parameters passed to it and after that it calls NtDeviceIoControlFile(). 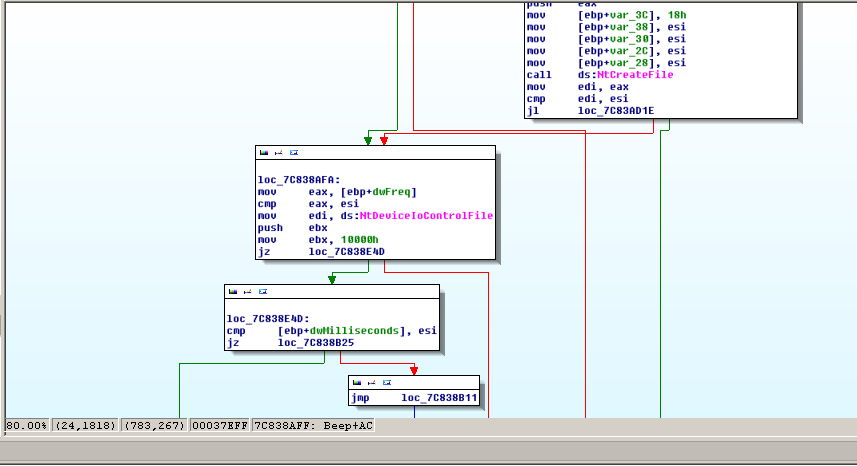 I hope now you are able to connect the dots now. If you can remember its the same sequence of function call you have seen in IRP tracker utility. Its already known to us that this NtDeviceIoControlFile is used for sending IOCTL codes to kernel driver. 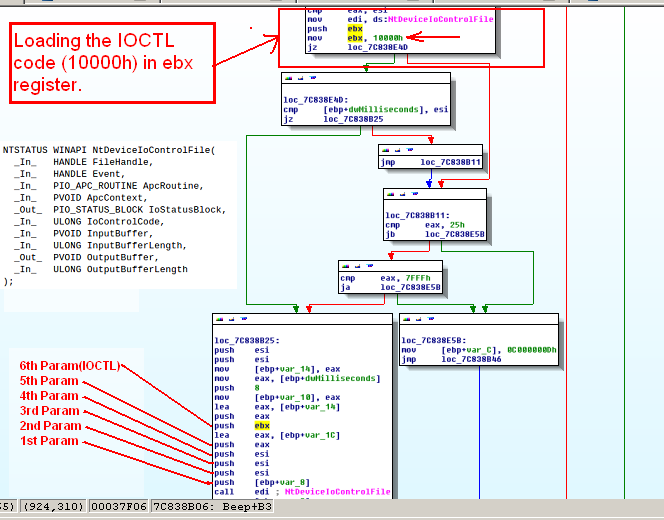 Hope you are able the connect the dots now. In above image you can see, first its loading 10000h into ebx register and then passing it to NtDeviceIoControlFile(). This is the same IOCTL code we have seen in IRP tracker utility.

Now lets attach the beep.exe file with immunity debugger and set a break point at NtDeviceIoControlFile(). After setting up the break point if we continue the execution, we should break at this point as shown in screen shot below. 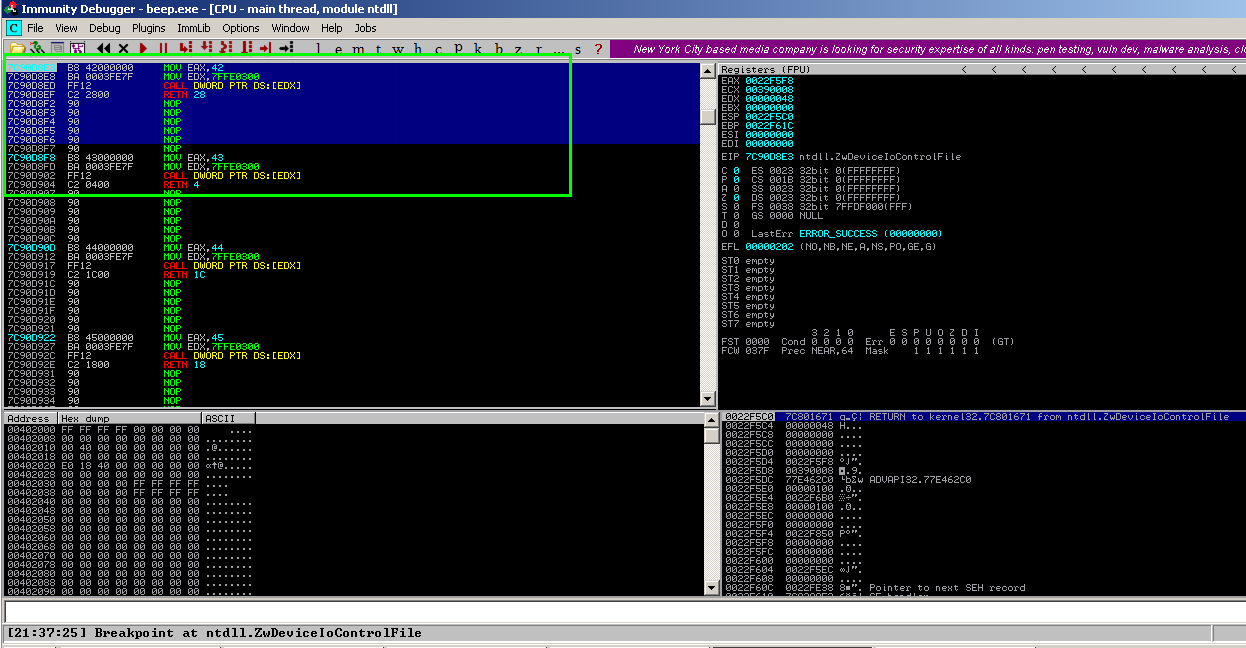 If you look at the entry point of NtDeviceIoControlFile() routine, you will see below instruction,

Now from this sequence of instructions we can understand that its probably going for a system call. Now if we go further and follow the CALL DWORD PTR DS:[EDX] instruction we will get something like this.

From this INT 2E it's now absolutely clear that its going to invoke a software interrupt. Now EAX is actually pointing to 0x42. So we can say this is the system call number. We can verify this from any SDDT dumping utility. In this case I've used ICESword tool to dump the System Service Descriptor Table. 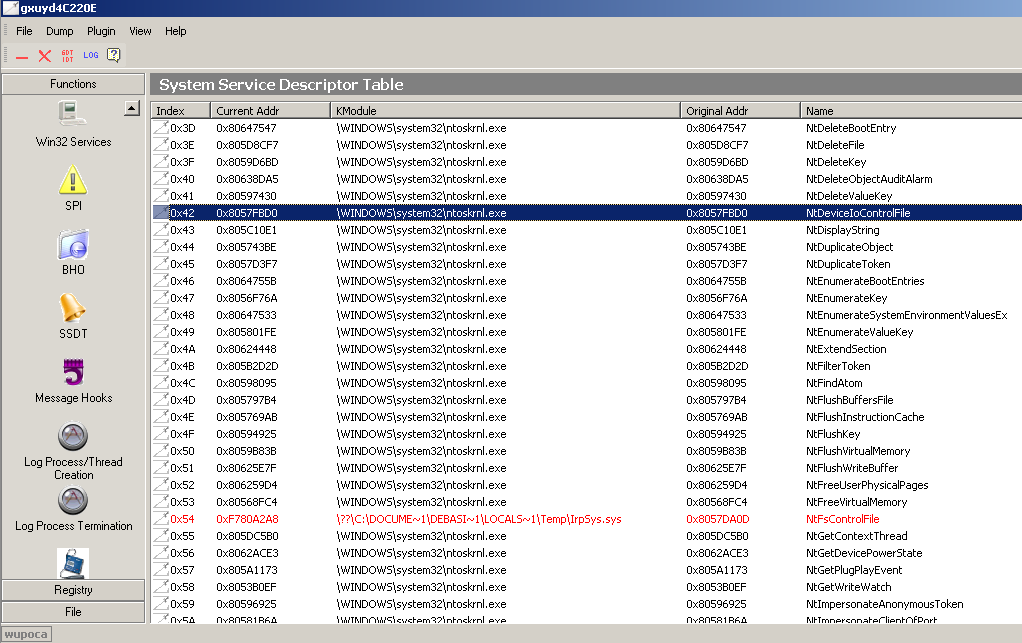 You can see systemcall 0x42 is actually pointing to Kernel version of NtDeviceIoControlFile() and its resides in the main windows kernel component which is ntoskrnl.exe. After invoking the interrupt OS will switch to kernel-mode to execute a system service. KiSytemServices is going to take the call.

The ‘int’ instructor causes the CPU to execute a software interrupt, i.e. it will go into the Interrupt Descriptor Table at index 2e and read the Interrupt Gate Descriptor at that location. The CPU switches automatically to the kernel-mode stack. The CPU automatically saves the user-mode program’s SS, ESP, EFLAGS, CS and EIP registers on the kernel-mode stack.

After loading the driver into IDA you should first see the Driver Entry subroutine. We know DriverEntry is the first routine called after a driver is loaded. Since its responsible for initializing the driver we should find all the IOCTL handler functions in this driver entry. First thing you will see IoCreateDevice() is getting called. 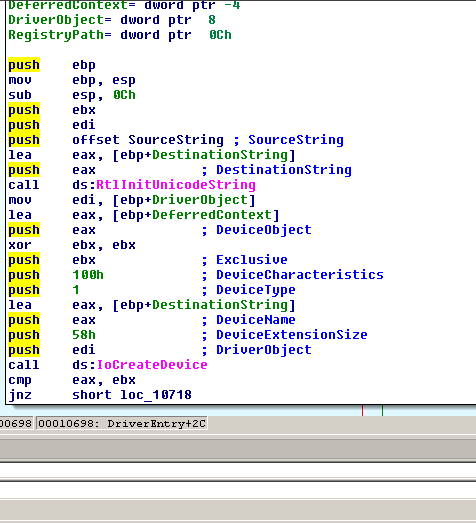 The IoCreateDevice() routine creates a device object for use by a driver. You should see call to this function on every driver's driver entry routine.

Now that we have successfully created our \Device\Beep device driver. So going further into the DriverEntry we will get a structure like this. 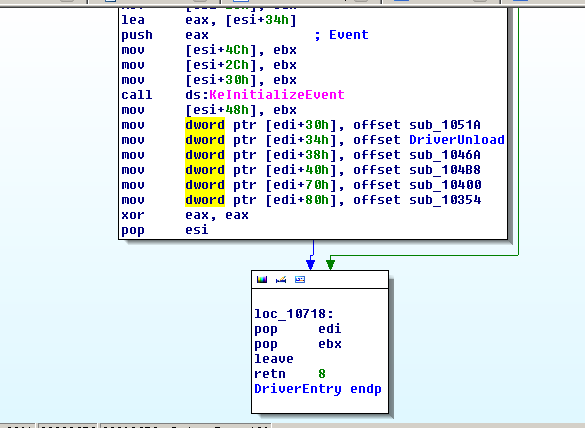 Digging further into all above mentioned IRP handlers (sub_xxxx), it was found that sub_10354 actually responsible for handling all IoControls. So we can conclude,

Now lets jump into sub_10354 in IDA pro. and have a look what its trying to do. Inside sub_10354 you should see somthing like this. 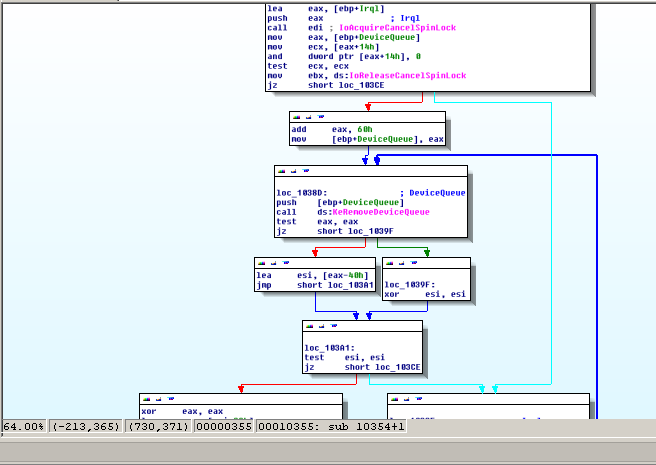 On a bigger picture you should notice calls to below functions.

The Windows Hardware Abstraction Layer (HAL) is implemented in Hal.dll. Hardware abstractions are sets of routines in software that emulate some platform-specific details, giving programs direct access to the hardware resources.They often allow programmers to write device-independent applications by providing standard Operating System (OS) calls to hardware. Each type of CPU has a specific instruction set architecture or ISA. One of the main functions of a compiler is to allow a programmer to write an algorithm in a high-level language without having to care about CPU-specific instructions. Then it is the job of the compiler to generate a CPU-specific executable. The same type of abstraction is made in operating systems, but OS APIs now represent the primitive operations of the machine, rather than an ISA.  This allows a programmer to use OS-level operations (i.e. task creation/deletion) in their programs while still remaining portable over a variety of different platforms.[Source : Wiki]

So to look at the assembly of HalMakeBeep we have to load up hal.dll in IDA. After loading hal.dll we will jump into HalMakeBeep routine. You should see lot of inline assembly inside this function. 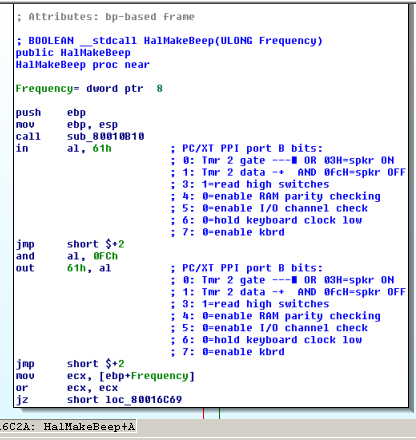 Every PC has an internal speaker. It can generating beeps of different frequencies. We can actually control the speaker by providing a frequency number which defines the pitch of the beep, then turning the speaker on for the duration of the beep.

Mainly we can communicate with the speaker controller using IN and OUT instructions. Below I've mentioned few steps in generating a beep: 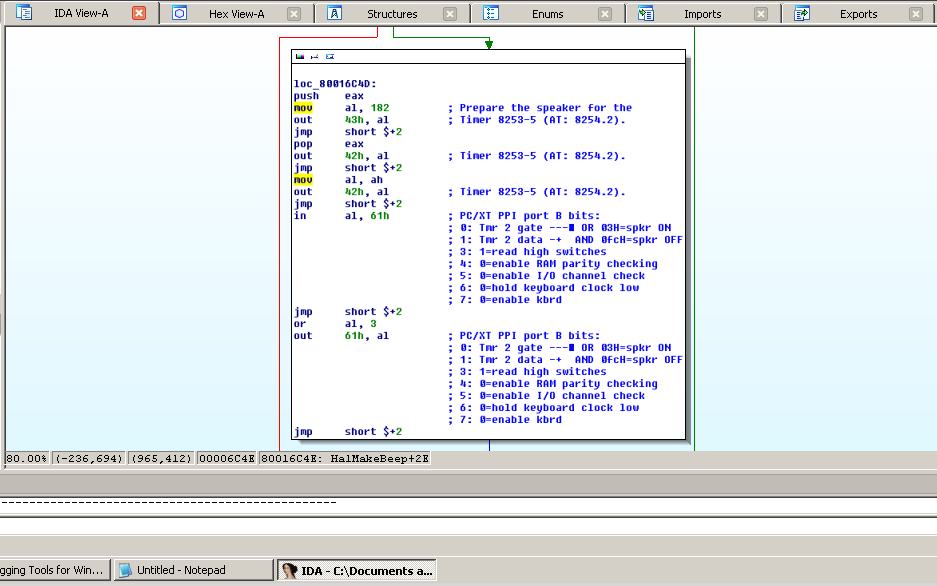 So now if we look at the HalMakeBeep routine it should make sense. You can see that its doing the same thing just describe above.

Thanks for reading. Hope you have enjoyed this post. If you believe i did something wrong anywhere and you want me to correct or i've missed something to cover, please drop an email or comment below.